The Government had previously announced a consultation on salary sacrifice and has yet to report on the outcome. Nevertheless the Chancellor pressed ahead with the Government plan which aims to bring funds into treasury coffers.

The benefits are in effect bought out of pre-tax earnings and therefore reduce the NI contributions and tax.
Higher rate tax payers will save more than basic rate payers, while additional rate payers have most to gain.

Employers’ NI contribution is based on the same earnings, so the employer pays less too and will often pass on some or all of the saving to employees, making salary sacrifice even more attractive. 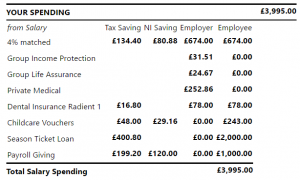 …but declares some schemes will remain exempt…

..while existing benefit schemes will be exempt until April 2018 and school fees, cars and accommodation will remain for a few years after that.